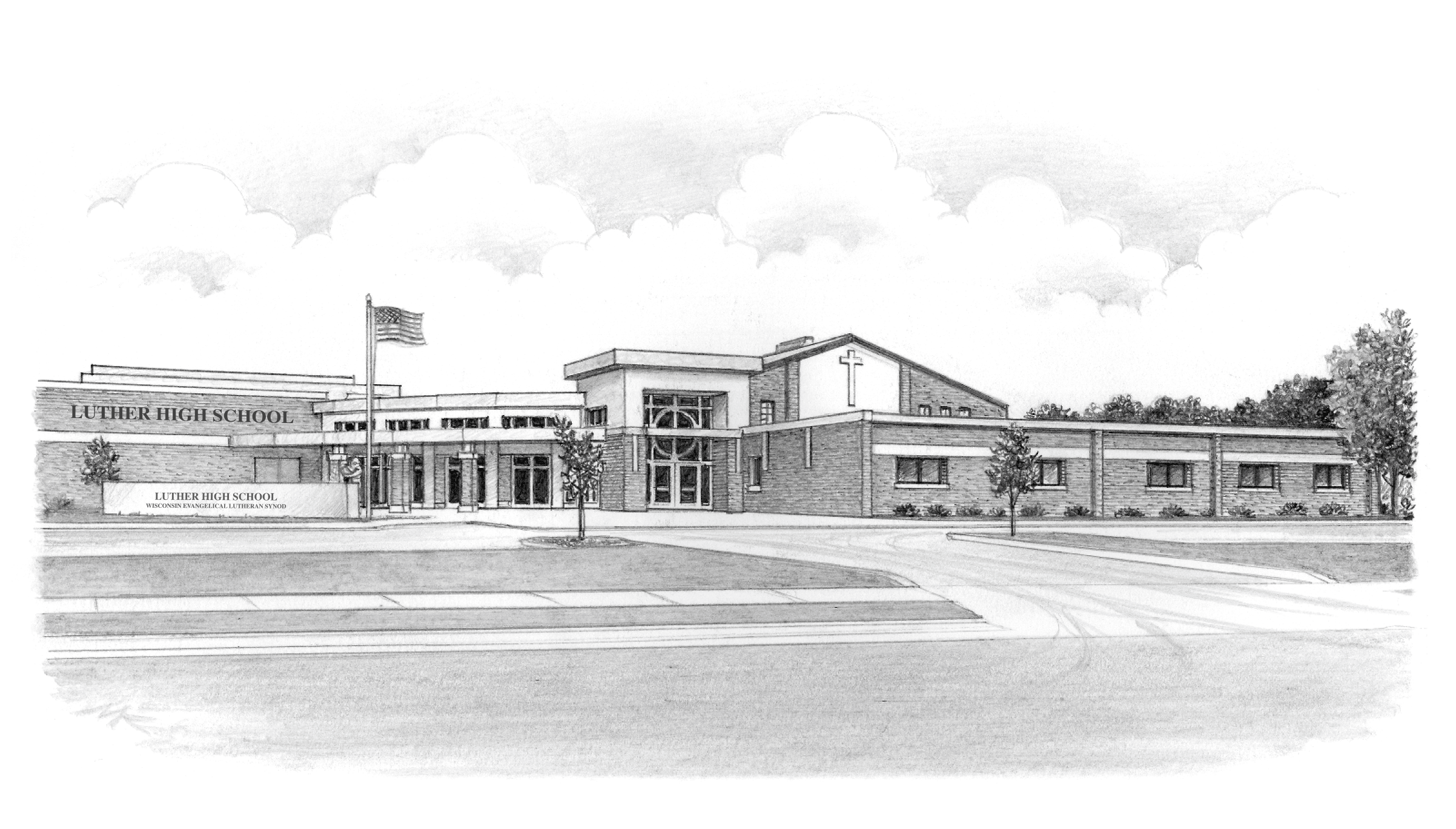 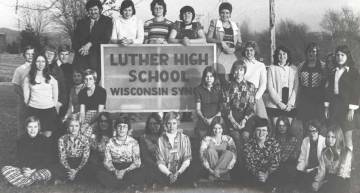 Driving along the endless track of our nation's smoothly paved highways, casually glancing at the well-cultivated fields and trim landscapes, most observers find it difficult to imagine that all this was once untamed wilderness whose beauty also inspired fear. Yet through these wilds traveled the early pioneers, and to them we of today are deeply indebted. They cut the paths, weathered the storms, and suffered the heartaches. They worked the long hours to develop something, not particularly for themselves, but rather for the generations, which were to come after them. 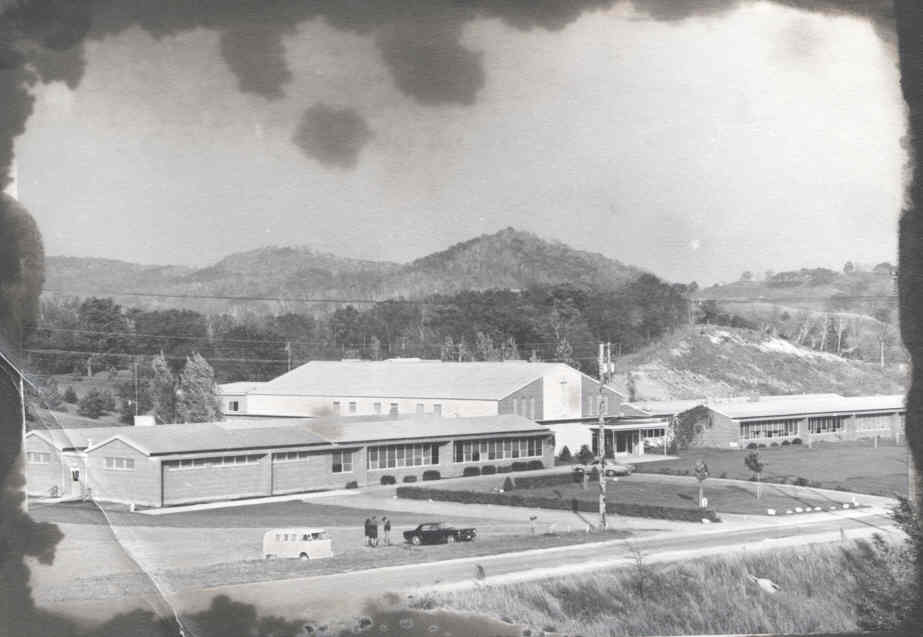 On Sunday, September 8, 1957, Luther High School formally opened its doors. A number of pioneers had been looking forward to that day since October 19, 1944. On that day a meeting was held at First Lutheran Church in La Crosse, Wisconsin to discuss the possible establishment of a Lutheran high school. The Rev. Harold Backer called the meeting to order, and the Rev. Walter Schumann opened the meeting with prayer. An early order of business was to elect Ralph Swantz as chairman of the meeting. The group resolved to elect a committee of three pastors, one teacher, and three laymen to study the matter of establishing a Lutheran high school. Among the laymen on this committee was William Trapp, one of the first officers of the Mississippi Valley Lutheran High School Association. An honorary lifetime member of the Board of Control, he served as president for a term and treasurer for many years.

By April 15, 1945, a constitution was presented to a group assembled in special session. The Board immediately took steps to proceed, incorporating according to the laws of Wisconsin, and fixed dues in the Association at $6.00 per year for adults and $1.20 per year for junior memberships. Only members of Synodical Conference Lutheran churches could maintain membership in the Association. Since the Association owned no building in which to begin this class, arrangements were made to rent the quarters formerly occupied by the Wisconsin Business University in downtown La Crosse, Wisconsin.

At the time there were four Wisconsin Synod congregations in La Crosse: First Evangelical Lutheran, Mt. Calvary, Grace (a mission congregation), and Immanuel. Of these churches First Lutheran and Immanuel had elementary schools. Mt. Calvary, which had been using the school facilities of First Lutheran, was contemplating the building and opening of its own school. Since the high school property was located in the Mt. Calvary area, some perhaps viewed this new plan to be most advantageous to that congregation. Another difficulty was the acceptance of this program by those congregations outside of the city of La Crosse who were forced by the 8-4 public school patterns in their areas to operate not six, but eight grades in their elementary schools.

In 1956 the Association asked Harold Molzahn, a professional engineer and officer of the Theo. J. Molzahn and Sons Construction Company, to submit plans for a new building to be located on the 40-acre high school grounds found in Onalaska, Wisconsin. Mr. Molzahn gave no firm bids, but since the Association was interested in possible construction costs, he did give several rough estimates. He felt that an academic wing could be constructed for approximately $84,000. A 60' by 90' gymnasium would cost in the neighborhood of $50,000 to $75,000. These estimates for an adequate building for an initial educational unit were moderate, but many still felt such funds could not be raised. Throughout 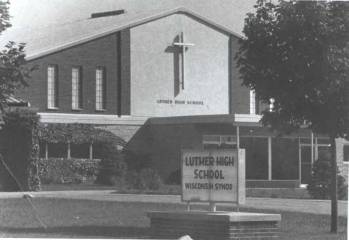 that year the search for temporary quarters continued.

Because of the type of construction, the building at Luther High drew a considerable amount of attention, particularly from those who were interested in providing adequate school space at a moderate cost. The original unit, as well as the subsequent additions to it, was constructed upon a predestined Butler steel frame. By employing such structural design, the planners substantially reduced building costs and gained the advantage of having a structure, which lent itself very readily to future expansion. While the roof of the Butler building has a pitch and is of metal, the remainder of the design is conventional for school architecture, the walls being constructed of block, brick, and stone. The original wing included three classrooms (one used as a library-study hall), a large unfinished assembly room which doubled as a gymnasium, an office, washroom facilities, and a basement furnace room. Together with excavating and drilling a well, the cost was approximately $70,000.

Luther High School opened its doors to twenty ninth graders on September 14, 1957. Faculty members and students who entered upon this pioneer venture can more fully appreciate the convenience and comforts at Luther today. In the 'first year of operation, for example, no landscaping had been done. Stepping out on a windy day, one was greeted with the sharp smart of fine Onalaska sand blowing in the face. Rainy days brought puddles of water and oozy mud in those places where a little black dirt had been hauled in. The first ninth grade class sowed some grass seed for the first time on Arbor Day in the spring of 1958. Added to the desolate appearance around the school was the road that led to the building. At the time it was a dead end street beginning at County Trunk SA and ending with the drive entering the property. It was a rare thing throughout the day to see any moving creatures besides the cows in the neighbor's fields. 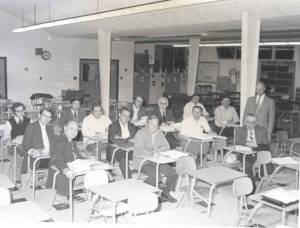 Steady enrollment increases (forty-six in 1958 and seventy-two in 1959) dictated the construction of an essential addition. But again conservative financial viewpoints motivated the Association to attempt to wipe out. Association felt that now the Triune God, in whose name this work had begun, was bringing a dream to reality. To many, the rapid development, which followed, seemed impossible. To those who had faithfully and earnestly sought the favorable outcome of this venture, it was a long-awaited but divinely promised answer to prayer. 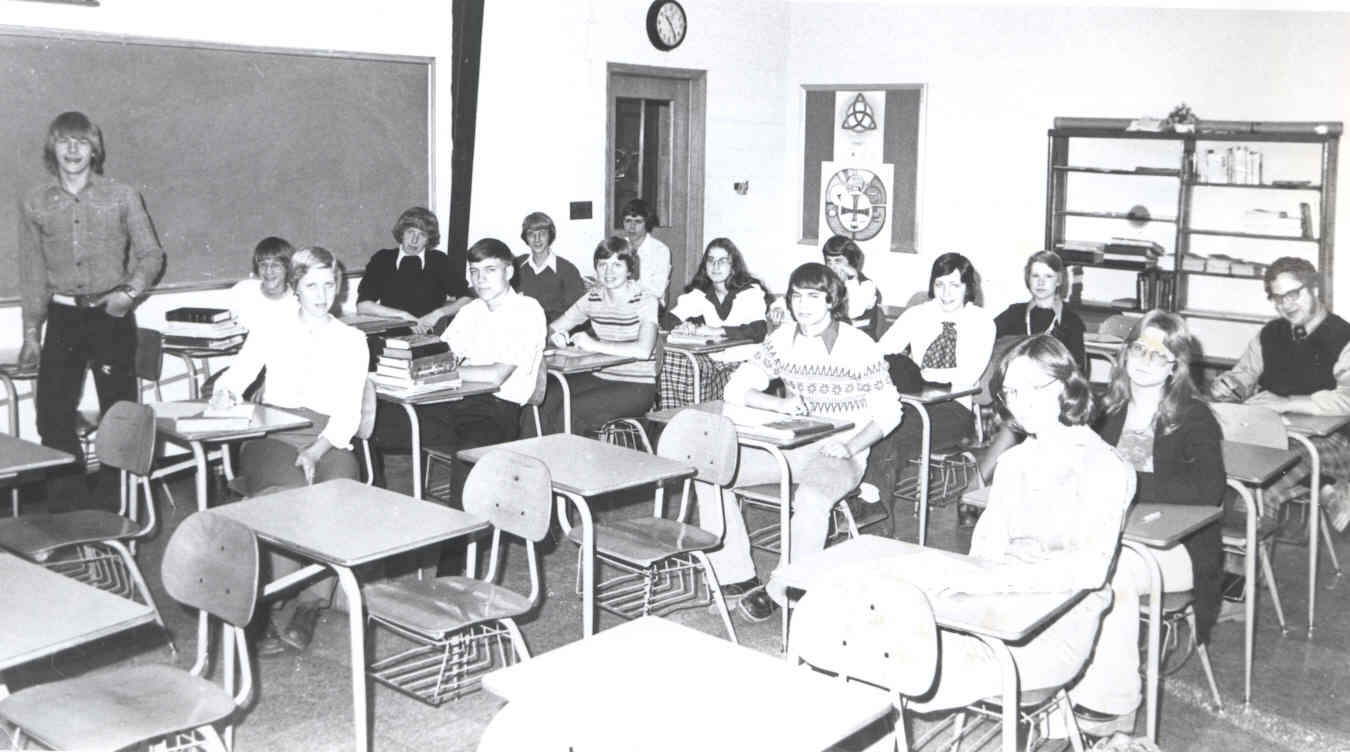